EBCDIC to ASCII, and ASCII to EBCDIC converter tool

TextPipe Pro is a robust EBCDIC to ASCII conversion utility. Once your files are decoded from EBCDIC into an ASCII text file in CSV, Tab, XML, JSON or other delimited format, you can load them into a database, or extract the information for other uses. TextPipe translates the widest set of mainframe data, which can vary due to code pages, Cobol compiler dialect and mainframe host machine byte-ordering.

You can also use TextPipe to convert ASCII files to EBCDIC format.

Once you drag and drop your mainframe files into TextPipe, you choose which filters will be used to convert the file:

Sometimes TextPipe won't be able to parse your copybook - due to PIC clauses missing trailing periods, comments in the wrong spot, bizarre line breaks or field names etc. Please just send us the copybook or filter and we'll be happy to help.

When a Mainframe EBCDIC copybook consists of multiple records, you need to separate them out into a general structure, with each record type going to a new file for clarity and ease of loading/processing. TextPipe 11 makes this easy.

In our sample copybook below, the second field of every segment contains a 5 character record type id, T-REC_ID, which has values of #REC#, #TRAA, #TRAD etc. Fields beyond this are unique to each segment. Note: Often, the record type field's VALUES are not included in the copybook, but has to be read from the comments or documentation. In these cases the record type field usually has a constant name like REC-ID.

With TextPipe 11+ (download), the steps to convert a multi-segment cobol file are:

When a Mainframe EBCDIC copybook consists of multiple records, you need to separate them out into a general structure, with each record type going to a new file for clarity and ease of loading/processing. TextPipe makes this easy.

Here is how it looks:

This results in the followings files being output

Sometimes the segment types can be a range of values, like 00-30, which could require a huge number of child records to be added. An alternative approach is available which allows you to use a pattern match to match the record type. With TextPipe (download), the steps are

In our sample file, each record starts with a 3 byte field which we will ignore, followed by a 5 letter record type id, #REC#, #TRAA, #TRAD etc. There is also a field following this record id, but we don't need it, and the value might not always be 'N'. Note: Often, the record type field's VALUES are not included in the copybook, but has to be read from the comments or documentation. In these cases the record type field usually has a constant name like REC-ID.

The general TextPipe pattern for each record type within the file looks like this:

Let's dig into this.

The first step is an EasyPattern (a user-friendly type of pattern match). It looks for

When something matches this pattern, it must be a record of type #TRTS, and it gets passed unchanged to the subfilter:

Pro Tip: We can easily copy this structure by selecting the top filter, and choosing the [x2] button in the footer.

Working out the copybook size

When we paste each copybook fragment into a mainframe copybook filter, we can click the [Show Parse Tree] button to find out the record length. e.g.

Once we know the length is 73, we just subtract 8 from it, (the first 3 characters followed by the 5 character record type = 8) to find out the remaining characters we need, in this case, 65:

We also have to grab the record type TRAA from the copybook and put it into the pattern match, and also into the output filename.

Then we move onto the next record type.

Once we have setup all the record types, we need to gather ALL the record patterns into one MASTER pattern match at the top of the list. 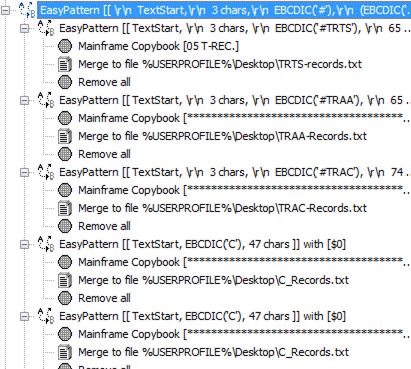 Then you're ready to drag and drop your mainframe file into TextPipe and click [Go] or press [F9]!

If the error log reports that there were extra bytes in the file that could not be matched, this indicates that

May the force be with you!

Once tested, the TextPipe filter can be run automatically or on a schedule from the command line. It can also be controlled by other software using COM.

Need Help With Your Copybook?

Please drop us an email with your copybook support2@datamystic.com